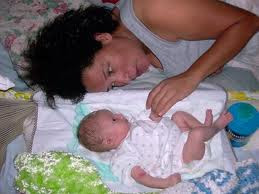 This case comes out of San Antonio, Texas and made headlines four years ago.  I post crime stories that are quirky and a little bizarre but this case transcends the ordinary bizarre.  I thought it so grizzly and disturbing, I hesitated to feature it.  But the story is already out. Nonetheless, I attach this warning:  May not be suitable for all audiences.

TEXAS:  33- year old Otty Sanchez, a former health care worker, was charged with capital murder in the death of her 3 ½ week old child.  Police found the child’s dismembered body in a bedroom.  Sanchez had used a steak knife to decapitate the child. Three of his toes were chewed off, his face torn away, his head severed and his brains ripped out.  Investigators say Sanchez was sitting on the sofa with self inflicted wounds to her chest and throat.  “I killed my baby, I killed my baby,” she screamed.  Seasoned officers stood in horror of the bloody scene.  She told investigators: “The devil made me do it.”  Sanchez had eaten the child’s brain and other body parts before stabbing herself.  It was a scene so gruesome, it stunned the officers to silence.  “You could have heard a pin drop.  No one was speaking,” said the police chief.

What could have driven this woman to such extreme madness?  The finger points to insanity.

According to her aunt, Sanchez had been “in” and “out” of psychiatric facilities and was reported to have heard voices before the fatal attack.  She had been diagnosed with postpartum psychosis. Sanchez, a schizophrenic with a history of hospitalizations, wasn’t taking medication and was depressed after her son’s birth.

The distraught father reportedly told the media, “She should burn in hell.”

Sanchez plead guilty, a plea deal defended by prosecutors who relied on the findings of psychiatric reports supporting Sanchez’s mental illness.  The court ruled Sanchez not guilty by reason of insanity and committed her to a mental hospital.  To date, Sanchez has not been found guilty of any crime.