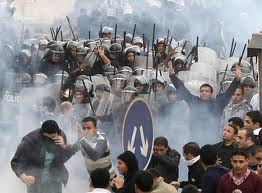 Egypt's interior minister has warned supporters of ousted president Mohamed Morsi that they will "soon" be dispersed from a sit-in in Cairo.

But thousands insist they will stay at the Rabaa al-Adawia mosque.

The area was the scene of bloody clashes between the army and protesters on Saturday, with doctors estimating that more than 100 people were killed.

The health ministry puts the death toll lower, at 65. Mr Morsi's Muslim Brotherhood has blamed the military for the deaths, accusing soldiers of shooting to kill.
The government has denied this, insisting security forces only used tear gas, not live rounds.

The BBC's Quentin Sommerville in Cairo says this appears to be untrue given the severity and number of injuries.

Tear gas, shotgun pellets and bullets were all in evidence during the fighting, he says.

The Grand Imam of Al-Azhar mosque - the highest Sunni Muslim authority in Egypt - has called for an investigation, while the vice-president of the interim government, Mohamed ElBaradei, said that excessive force had been used.

Saturday's clashes, which began before dawn and carried on for several hours, were the most serious bout of violence since Mr Morsi was ousted.

It appears they began after some of the Morsi supporters tried to extend the barricades around their protest site, and the security forces responded.

Dr Hesham Ibrahim described scenes at the hospital as like "hell"

"When I arrived, bullets were whizzing past my ears," Ahmed Nashar, a Brotherhood spokesman who witnessed the clashes, told the BBC.

"Today was just brutal - people were fired at, with live firearms."

Medics at a nearby field hospital told the BBC they believed about 70% of the casualties were caused by live fire - with many of the victims hit in the chest or head by snipers firing from rooftops.

"They were mostly killed by bullet wounds, especially by snipers, especially in the head. We have nearly cut throats, just like animals," said Doctor Hesham Ibrahim.

Mr Morsi, Egypt's first democratically elected president, has been formally remanded in custody at an undisclosed location for an initial 15-day period, according to a judicial order on Friday.

The order was the first official statement on Mr Morsi's legal status since he was overthrown.

Muslim Brotherhood's spokesperson says the international community must step in

He has been accused of the "premeditated murder of some prisoners, officers and soldiers" when he and several Muslim Brotherhood leaders were freed during a breakout at a Cairo prison in January 2011.

He is alleged to have plotted attacks on jails in the uprising that overthrew President Hosni Mubarak.

Mr Morsi is also accused of conspiring with the Palestinian militant group Hamas, which governs the Gaza Strip and has strong links with the Muslim Brotherhood.

On Saturday, the interior ministry said that Mr Morsi would be transferred to Torah Prison, where Mubarak is being held.- BBC
Berita Terkini;