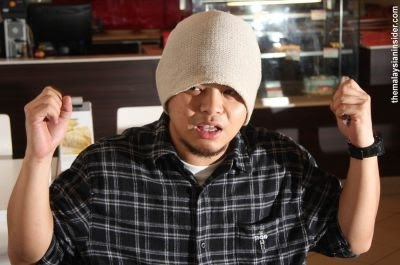 As he stepped out of his white Toyota Land Cruiser wearing his trademark beanie, baggy jeans, large metal-beaded necklace and a loose T-shirt, he walked quickly towards a mamak shop holding his green water tumbler and immediately introduced himself.

“Hi, I am Meng Chee. I’m really sorry I’m late. I set two alarm clocks but I still overslept,” he said to The Malaysian Insider when met recently.

Wee Meng Chee a.k.a Namewee really needs no introduction. Everyone knows the multi-hyphenate Muar-born foul-mouthed rapper-songwriter-director-actor who is no stranger to controversy.

Using the Chinese words for takeaway, he said, “I just want to ta pau something, then we can start the interview.”

After paying for his food, he made his way to a friend’s studio on the first floor of a shop lot in Kota Damansara to the back pantry, sat down on a stool at a small round table and opened his takeaway nasi kandar. He even asked for permission to eat his ‘breakfast’ (actually a very late lunch) as the interview went on.

“Namewee is actually my YouTube account name. It came from my name ‘Meng Chee’ which means ‘name’ in Chinese. The media picked it up and eventually Namewee stuck,” he shrugged and smiled.

As he ate his rice with a white plastic spoon, Namewee kept apologising for his tardiness, saying that he was really hungry as he had been working the whole night.

“Believe it or not, I have been working till this morning. I work 18 hours every day and sleep for about three hours a day.

“You may not believe me but I practically have no life. People think I am always going out partying, clubbing, but really… my life is between my refrigerator and my studio,” he said a slightly husky voice.

Namewee has found himself constantly criticised by Malay-rights groups like Perkasa and Umno-owned Utusan Malaysia, who call him a racist out to insult the Malays.

Yet he claims to have no ill feelings towards them. “We all know Perkasa and Utusan are extremists. I think their job is to criticise somebody, and I became their target,” he smiled.

“To be honest, I was initially shocked and thought I was wrong. But after a while, I felt tired and fed up having to explain myself. I never intend to insult Muslims. But they would twist and turn the stories and make it sound like no one else is right but them.”

Now, however, Namewee said he found the shenanigans interesting.

“You see, when they do these things, it makes my life and Malaysian news so much more interesting. Otherwise, Malaysian news would be so boring, like Singapore news,” he said laughing.

So does he have any Malay friends? Without hesitation, Namewee sniggered and said, “Got. Did you know that my grandmother is a Nyonya? My mother speaks fluent Bahasa Malaysia. My neighbours in Muar are mostly Malays and my father’s parents run a small kopitiam selling Malay food. A lot of our Malay friends go there.

“I have so many Malay friends that when we have open house during Chinese New Year, most of those who visit our house are Malays. We used to joke around among races and there was no tension. But now, people can’t seem to accept that. This is all because of politics.”

And obviously, being famous he has garnered not only fans but haters as well.

“You would be surprised I have a lot of haters and they are Chinese,” he said as he raised an eyebrow.

Why? “To the conservative Chinese, they can’t accept that I sing and rap songs which are not just about love. I sing and rap about everything. But to them, Chinese songs must be love songs,” he said.

Namewee studied in SRJK Chung Hwa 1B and Chung Hwa High School in Muar before furthering his studies in Mass Communications in Ming Chuan University in Taiwan in 2002. While in Taiwan, he also worked backstage in a singing competition called “A Million Star”. He returned to Malaysia in 2006.

“My mother was the host of the karaoke competition show on television,” he said proudly, adding that he has a younger sister who will be going to London to study theatre and a younger brother who is currently in Japan taking a movie-making course.

“I first picked up the mike when I was in kindergarten. I can’t remember what song I sang but it was a children’s song. I sang and played a small piano.”

When asked about the last time he went on holiday, being the workaholic that he is, he paused and stared into space.

“I have been working. My mind keeps running. I have so many ideas and views that I want to express and I feel like I don’t have enough time because I feel like I am dying soon.

“I have 600 to 700 songs in my computer. I have about 30 to 40 movie ideas. So I have this phobia that I will never get everything out before I die. That is why I feel life it too short.”

So far, Namewee said he has about 70 music videos on YouTube and four movies out.

He said it did occur to him once to try change his image and perhaps watch his language. “But then again, why should I?  This is me. I want to express my creativity. YouTube didn’t stop me, so why should I?” – September 15, 2013.