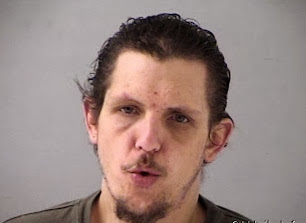 A man was arrested and charged with public indecency related charges after he was seen rubbing up against an inflatable raft in public, according to police reports in Ohio.

Ohio Police said that neighbors of the man arrested for public indecency repeatedly said they are alarmed by his behavior and hope he gets mental help.

Edwin Charles Tobergta III, 34, of Harmon Avenue, was arrested for allegedly strolling out naked from his back door about 1:20 pm and having sex with a rubber pool, according to a Hamilton police report.

Tobergta was indicted by a Butler County grand jury Wednesday for public indecency, a 5th degree felony. If convicted, he faces 12 months behind bars.

The 10 year-old daughter of Theresa Teague was enjoying her new pool, when she ran inside her house and said: "Tobergta was doing something weird out there," Teague said.

Tobergta was caught having sex with an inflatable toy Teague said a neighbor had thrown out to the trash.
“He was screaming, ‘Please forgive me. I will not do it again. Do not call the police,'" as he ran back to his house, Teague said.

Teague’s girl is now reluctant to play in her backyard, even though she knows that Tobergta is in jail.

"We're looking to take her to counseling,"

Timothy Teague, the girl's grandfather, said. He also said he is shocked by what happened.

"How can a man do something with a rubber raft in front of a 10-year-old? It's very unfortunate," he said.

Theresa Teague moved to the neighborhood last year and said she had no idea about Tobergta’s past.

"I feel that as ordinary citizens, we need to be aware of such things," she said.

Tobergta has been arrested several times before for similar offenses, according to the Hamilton Municipal Court records.

Police officers reported that Tobergta refused to put his clothes back on, tried to grab an officer and then threatened that officer.

Tobergta is being held in the Butler County Jail on $25,000 bond. He is scheduled to be arraigned next week before Common Pleas of Butler County Judge Charles Pater.